A roundup of our favourite marketing campaigns during COVID-19 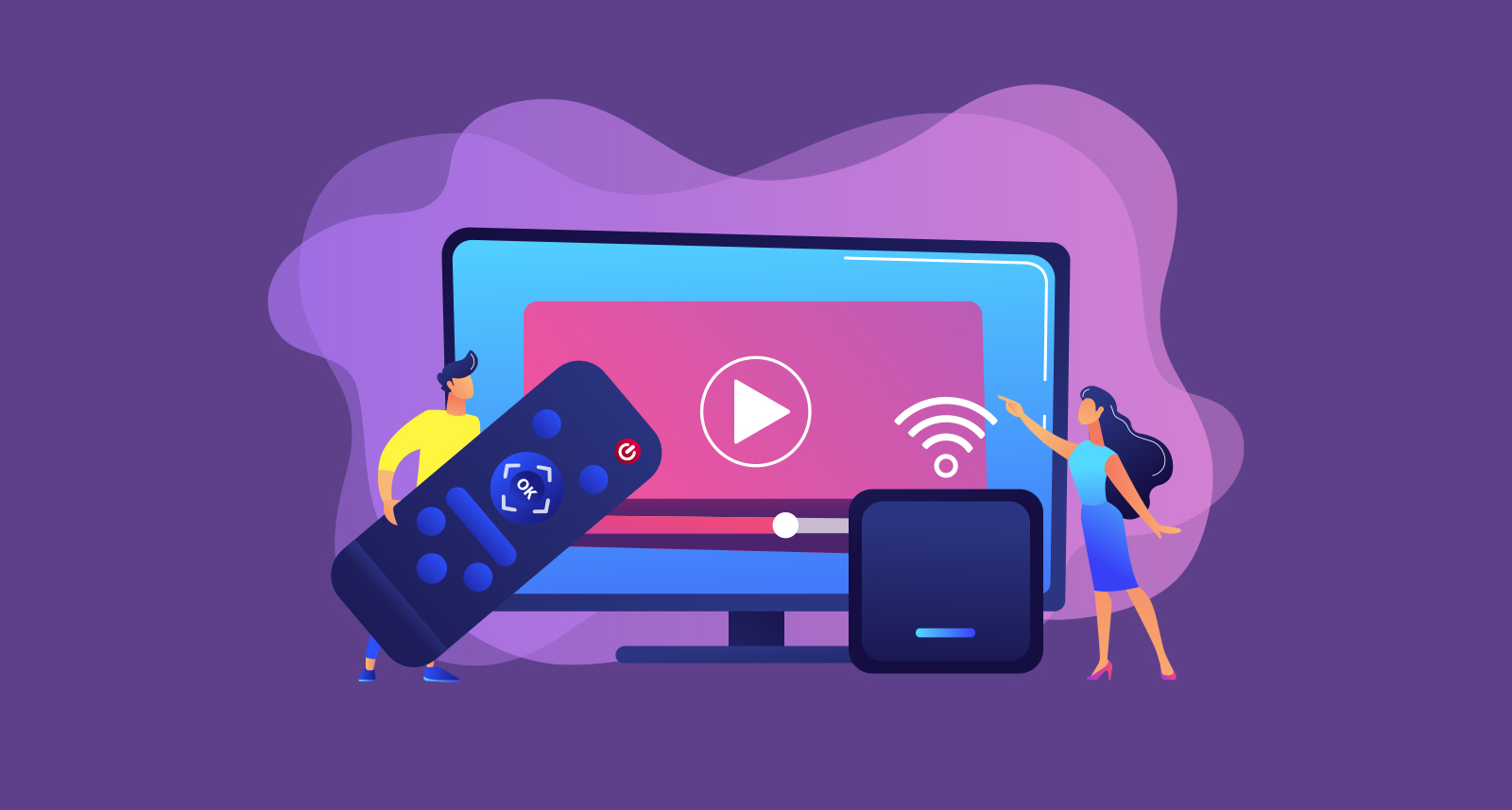 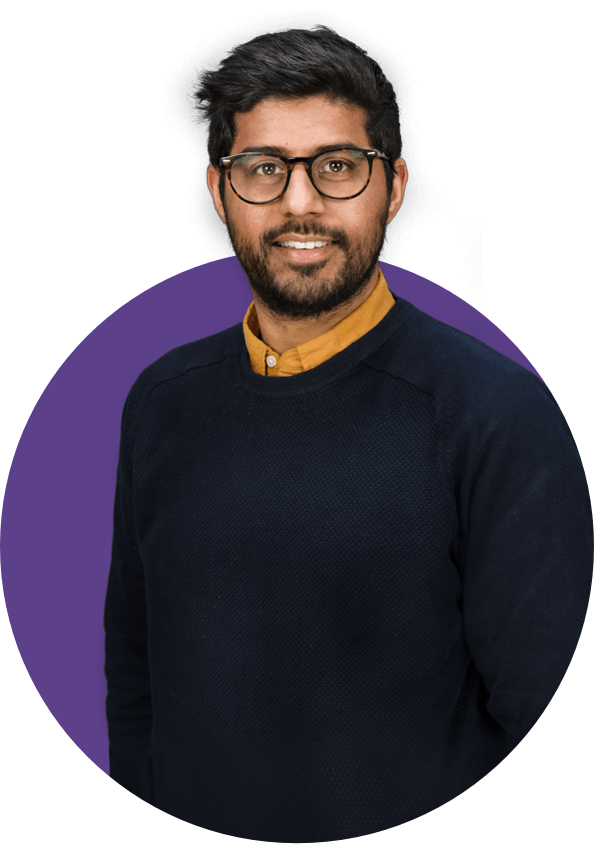 It goes without saying, but 2020 has certainly been a year to remember. The global pandemic has forced many businesses to adapt their operations in order to survive. One particular department that many brands have had to get their creative hats on, is in marketing.

Whether they’ve been reaffirming lockdown messaging, utilising their misfortunes, or taking advantage of lockdown fads, marketing departments around the world have certainly had their work cut out to ensure their brands have presence and visibility.

We’ve put together some of our favourite marketing campaigns from the past 6 months.

Honda, Until We Drive Again

When lockdowns started to appear around the world, it posed a real problem for advertisers who relied heavily on creating new and innovative TV ads. Honda are known for creating visually stunning adverts, but faced with the challenge of being stuck at home, they managed to play on that, and create an advert that was entirely created at home. By using a toy car as the focus point of the ad, they managed to pull off an ad that provided brand exposure, but also reinforced the ‘stay at home’ messaging. Take a look for yourself.

Having to stay at home made people branch out to certain pastimes that have long been forgotten. Between February and May, there was a 550% increase in searches for ‘Buy Jigsaw Puzzles Online’. Many brands were quick to jump on to the trend, but our favourite has to go to Heinz, who created an incredibly difficult puzzle, which could take some time to complete. They were also clever enough to give their audiences a chance to get their hands on one of the puzzles, by engaging with them on social media, they could send you 1 of just 57 puzzles made.

Early on during the global pandemic, it was clear that people would have to find a way to keep in touch with friends and family. Soon enough, Houseparty was blowing up, and people everywhere were having beers with friends over video calls. Heineken put themselves at the forefront of beer selection with this clever ad, highlighting those annoying little mishaps and funny moments, along with the lengths we will go to in order to have a catchup with your bestie, partner, or family.

Apple continues to throw creativity at the forefront of what their products are designed for, with this simplistic ad. By using a combination of still images and video, they showcase the versatility of their products, and how they play a huge part in our everyday lives. In this ad, they show celebrities using Apple devices, as well as the public, and this is a very clever trick. It gives people a feeling of connection to these figures that people idolise. If a celebrity can use a Macbook to create their Podcasts, or host a Facebook Live forum, why can’t I? They position themselves as being the choice of the best.

In order to push the message for people to continue to be creative, they also made a number of free resources online, from 30 activities to do with your kids, to providing people with a free trial for Final Cut Pro X. What better way to get people to try your product, than when they have nothing better to do?

Nike – You Can’t Stop Us

Committed to inspiring people, Nike released an ad that was more focussed on bringing people together through sport. The ad was created to coincide with the NBA’s return following the COVID-19 lockdown measures across the US, and the message is clear – you can’t stop sport, because you can’t stop these athletes. The seamless editing in this ad makes it incredibly interesting to watch, and according to the agency behind its creation, the split screen ad is meant to inspire athletes to keep using their voices and to come together to create change, which takes us to the second message behind the ad, which is surrounding solidarity following the death of Geroge Flloyd, and the subsequent BLM protests that took place.

The ad amassed a whopping 57million+ views on Youtube, and it’s easy to see why.

Following the ease in lockdown measures, with shops, bars and restaurants able to re-open with the introduction of social distancing measures, Heineken managed to capture several cliches surrounding the new guidelines, with people touching elbows instead of shaking hands or fist bumping, those awkward encounters in narrow hallways where you try to keep a distance passing other people, and also the boundaries of what is acceptable – can we share a bowl of chips, or should we get our own? They do a brilliant job in making us feel connected with the brand, because we can relate to every one of the interactions we see, and that further solidifies the brand with its intended audience.

The timing for this campaign couldn’t have been any worse. Just as snacking brand Emily was about to launch their first outdoor advertising campaign back in April, the country went into lockdown. Once they realised that not many people would actually see the advert, they were quick to change up their creative, and poke some fun at their misfortune. 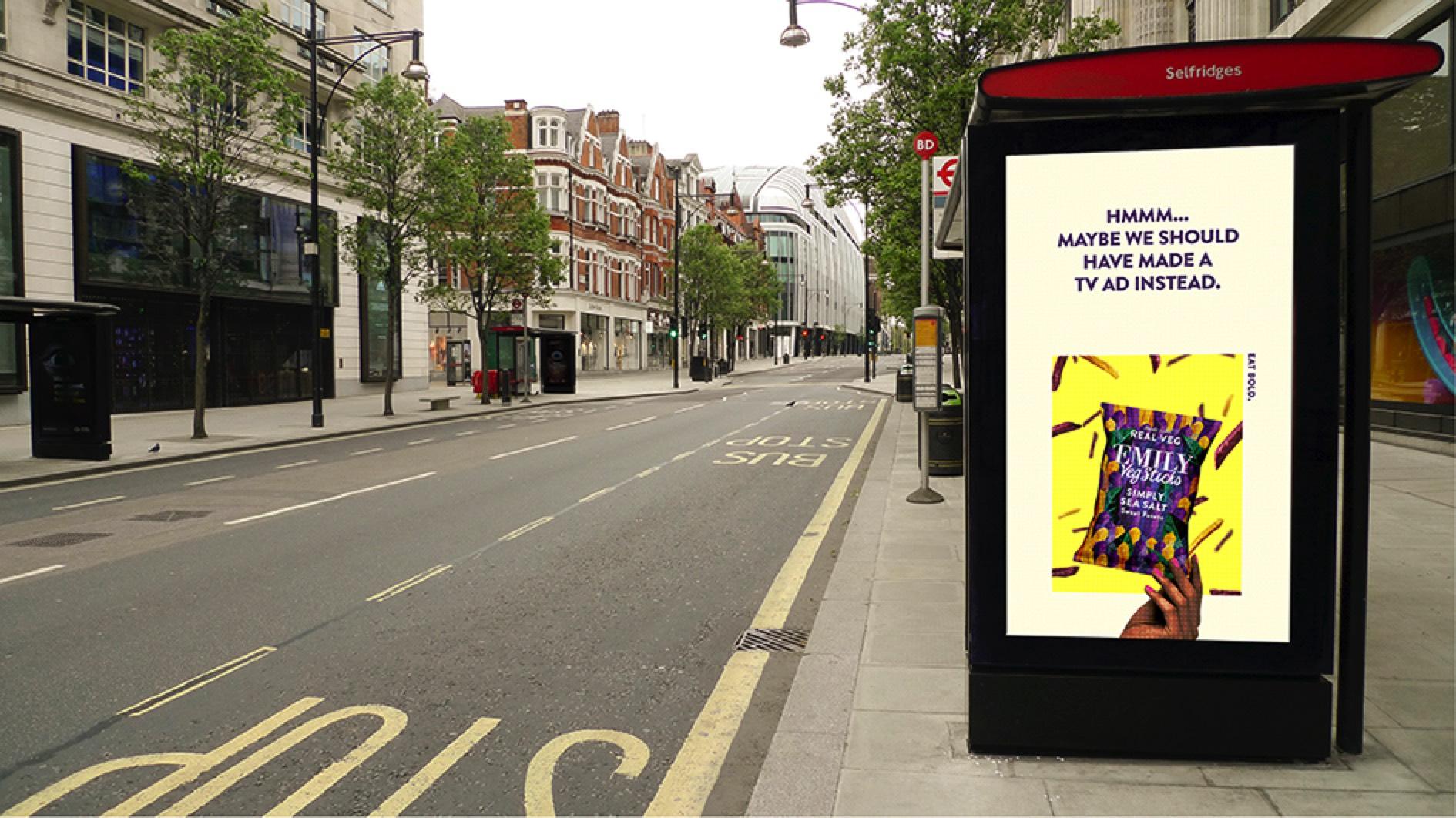 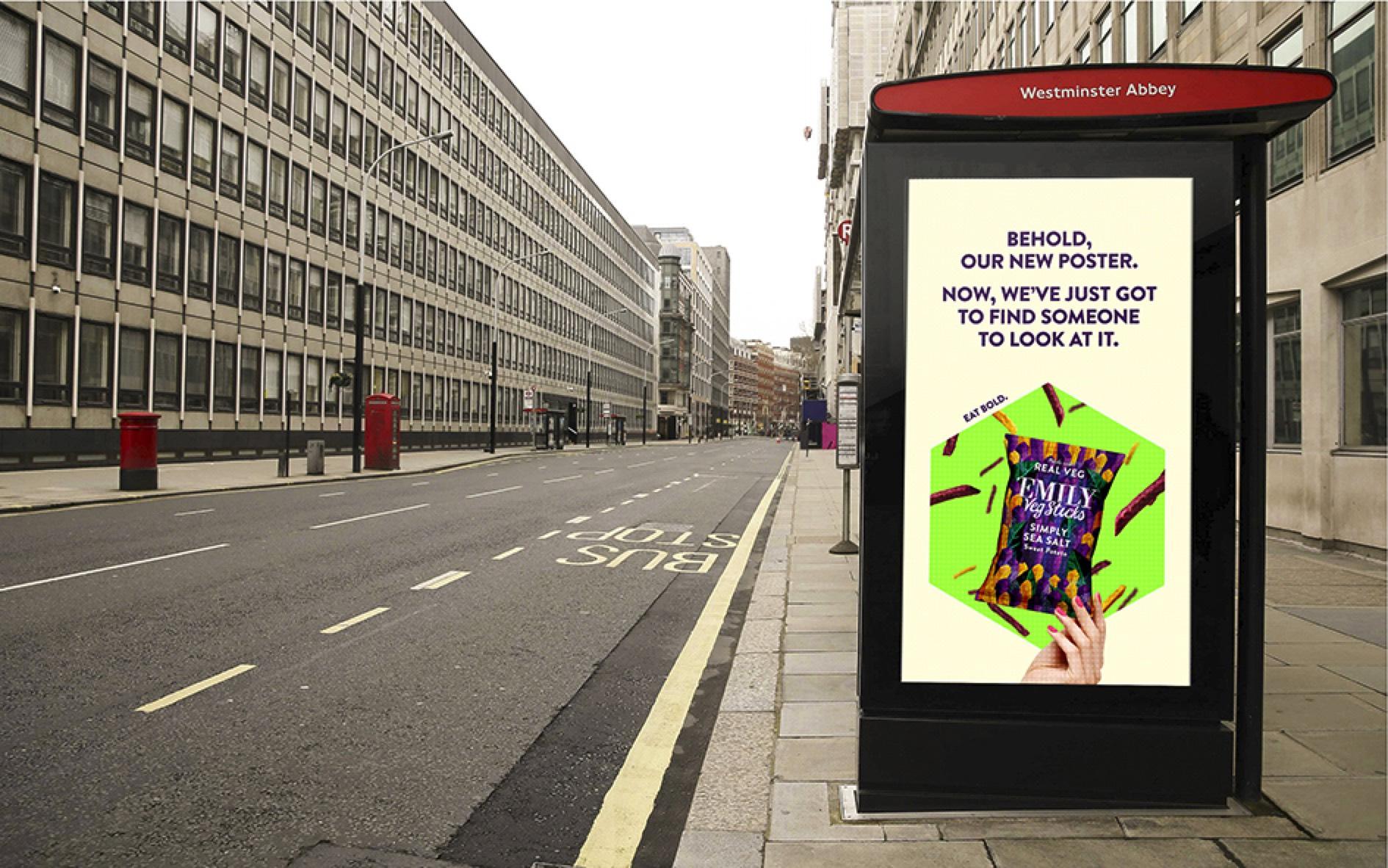 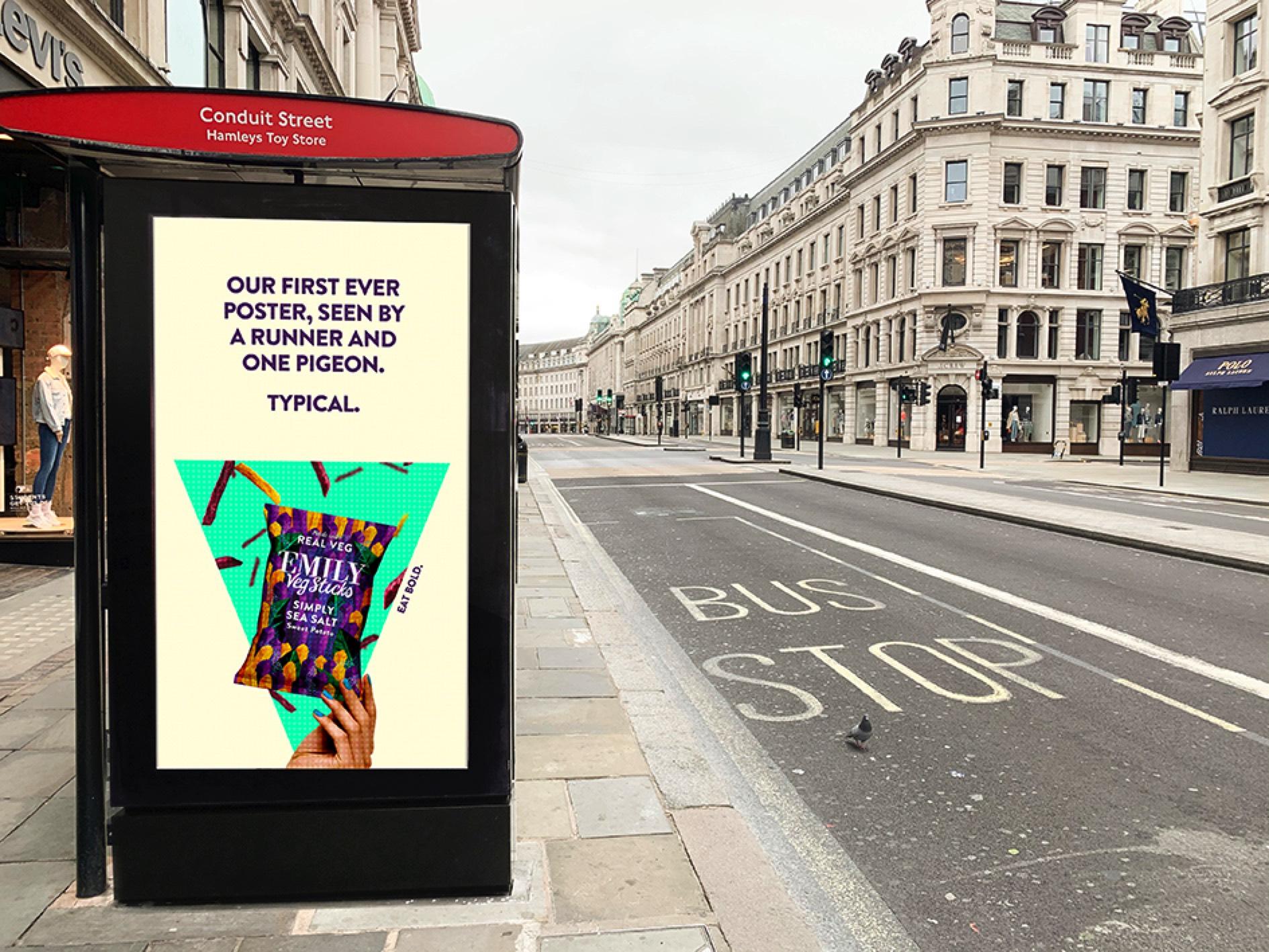 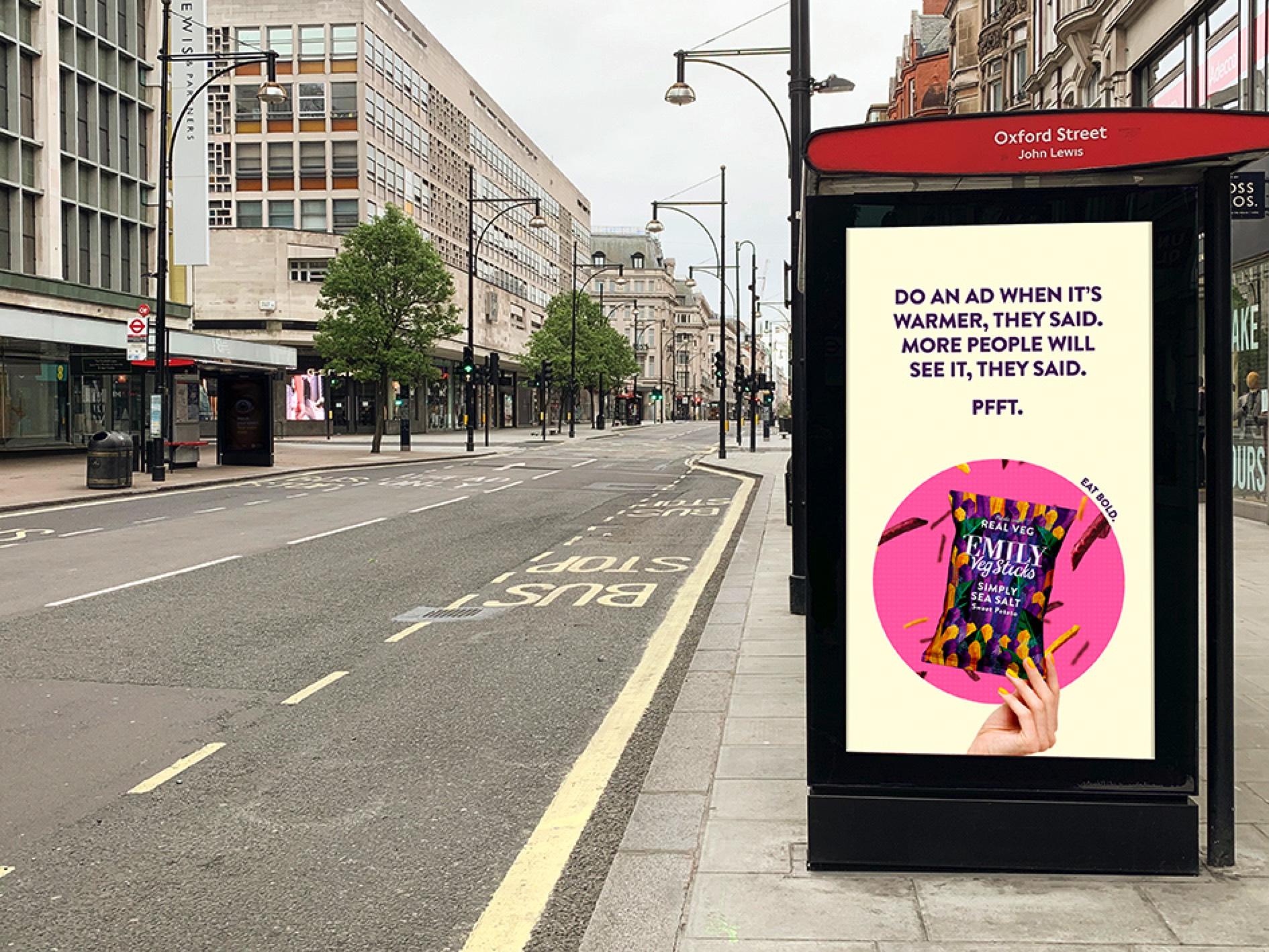 Sometimes, less is more. Guinness were very clever to get the message ‘Stay At Home’ across by using a cream couch, combined with strategic positioning of the logo and the tagline to make it look like a pint of Guinness. 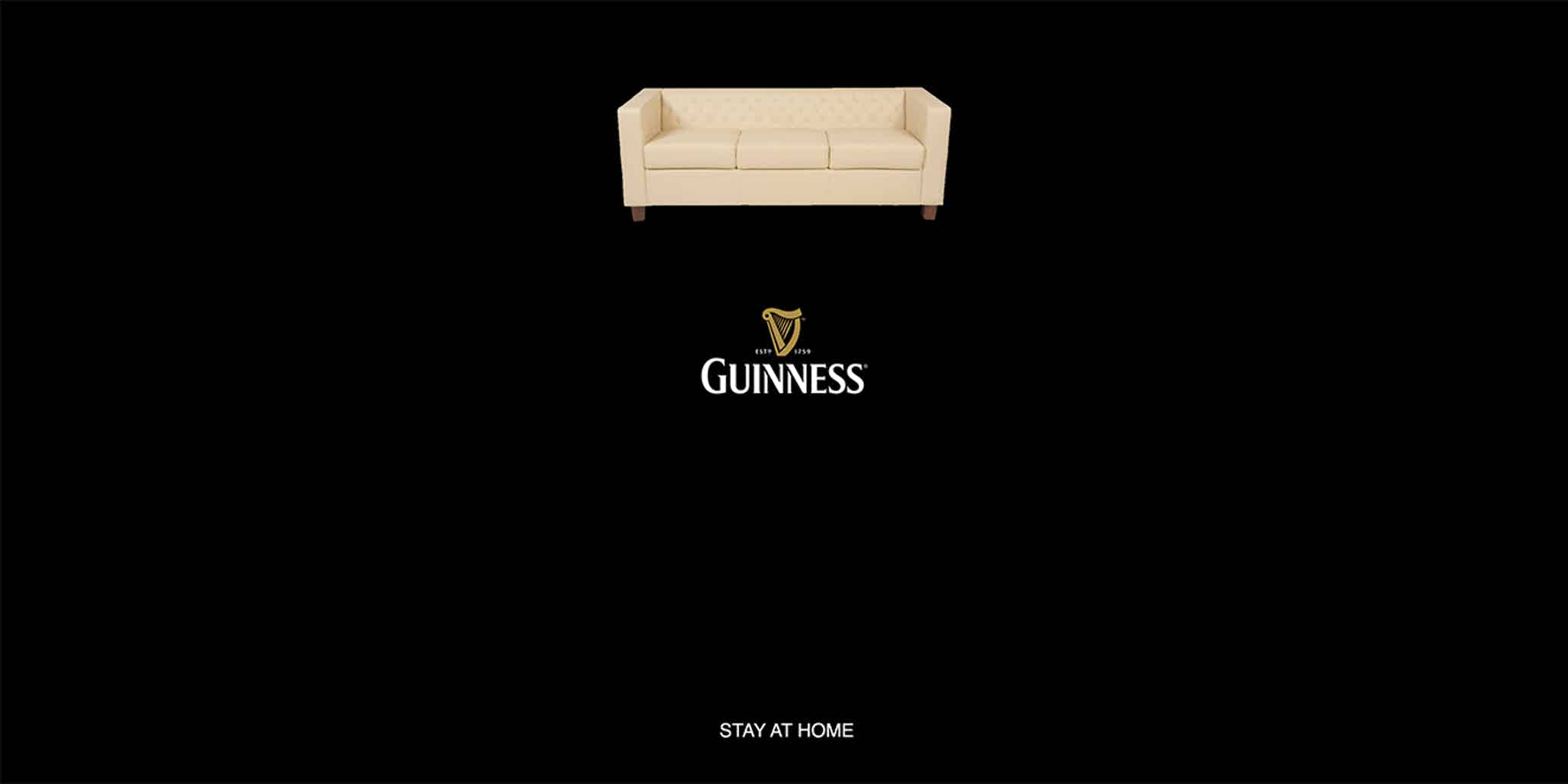 It’s well known that Starbucks put your name on their takeaway cups, and there have been many campaigns done around this previously. They’ve once again taken advantage of this element, and have produced an ad to encourage customers to wear a mask when entering their stores… despite the fact there may be some difficulty in hearing your name! 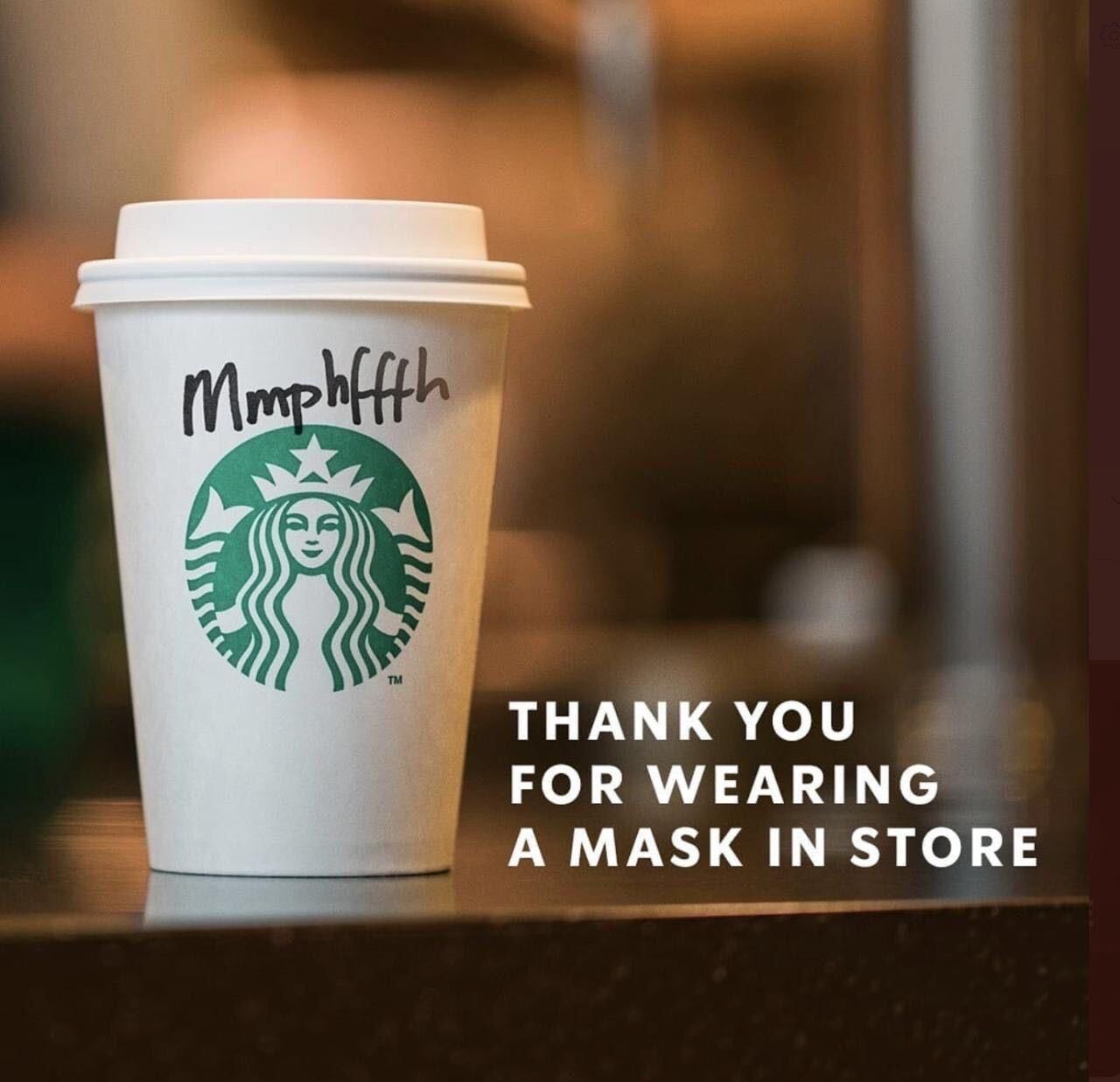